Customer Satisfaction Feedback Form
Thank you for giving us the opportunity to serve you better. Please help us by taking a few minutes to tell us about the service that you have received so far.
Home
News and Events
Alborz Province Governor appreciation from the knowledge-based ABADGARAN Group in the exhibition for Research and Technology Achievements.

Alborz Province Governor appreciation from the knowledge-based ABADGARAN Group in the exhibition for Research and Technology Achievements.

Research, Technology and Technology market National Week Exhibition in 2017 from 16th ;to 20th toward the Research and Technology week was held in Karaj city, Chamran martyr ;Park was welcomed with the presence of the researchers, scientists, technologists and ;industrialists and was the underlying appropriate opportunities to introduce the latest achievements of knowledge-based companies to their business contacts. The presence of high-level officials and provincial in the exhibition was very impressive and worthwhile. At the opening ceremony, Dr. Vaezi the honorable Minister of Communications and Technology ;were referred the Alborz province as the hub of the country's research. High-level officials of ;the province in the company with Governor Mr. doctor Tahaii were visited the place ;of the ABADGARAN Construction Chemical Manufacture and were captured information from the latest scientific achievements of the company. Then, researchers were taken encouraged ;and supported the company. At the closing ceremony, the Appreciation letter was dedicated to company representative as memorial. 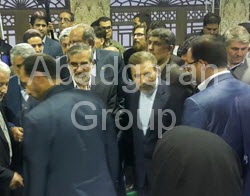