Customer Satisfaction Feedback Form
Thank you for giving us the opportunity to serve you better. Please help us by taking a few minutes to tell us about the service that you have received so far.

Home
News and Events
The Premier Research and Technology News

The Premier Research and Technology News

The Abadgaran Construction Chemicals Company has been nominated and presented as the Premiere Technology Company of Alborz Province during a research and technology celebration conference which was held in Alborz Province - Iran. This conference was held simultaneously during research and technology week at natural resources campus of Agriculture - Karaj University.The Senior Officials and authorities from Ministry of Sciences and Alborz Governor General office were the attendee to this conference who visited the achievements of the scientific and knowledge base units of Alborz Province. Plaques of appreciation and statues were awarded to the elected people by Dr.Khosro Piri – Vice Minister of Technology Policy & Planning at the Ministry of Sciences, Technology & Science and Alborz General Governor. 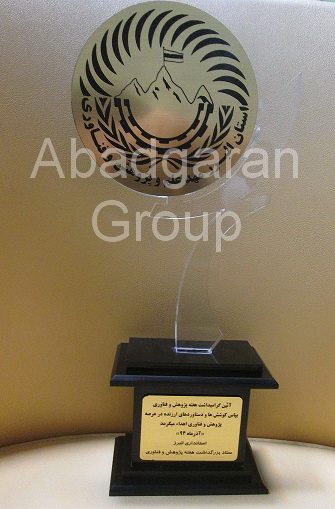